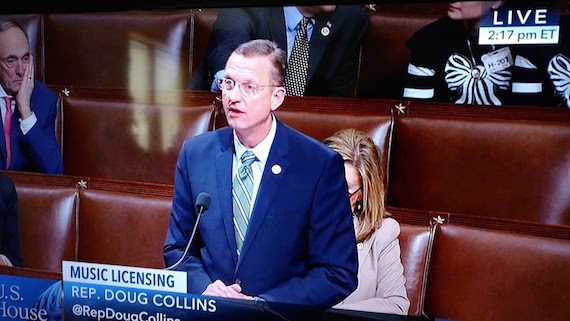 The Music Modernization Act, (MMA) H.R. 5447, was adopted April 25 by a unanimous vote (415-0) by the U.S. House of Representatives. The bill now moves to the U.S. Senate, where a hearing is scheduled for May 15 in the Senate Judiciary Committee.

The Music Modernization Act would change a 1909 mechanical royalty standard to one that reflects a song’s worth in today’s marketplace. The bill also creates a new Music Licensing Collective governed by songwriters and music publishers, and mandates equitable distribution to songwriters of any unclaimed funds.

Other portions of the bill include:

Voting begins Monday, April 30 for the Nashville Songwriters Association International’s 10 “Song I Wish I’d Written” awards. The 130-song ballot is comprised of Nashville-associated songs that charted in Billboard Airplay Top 20 on the Christian, Country, Pop and Rock charts. Ballot-eligible singles must have charted between July 1, 2017, and April 30, 2018, and not have been awarded the previous year. The song that receives the highest number of votes will be NSAI’s 51st Song of the Year.

NSAI will recognize the 10 ‘Songs I Wish I’d Written’ awards, NSAI Song of the Year, Songwriter of the Year and Songwriter-Artist of the Year at the Nashville Songwriter Awards on Sept. 19, 2018, at the Ryman Auditorium.

Voting is open to current Professional Songwriter Members of NSAI and will run from Monday, April 30-May 13. To join, renew, or check on the status of a membership, contact Lindsay Gum at lindsay@nashvillesongwriters.com. Tyler Dial has announced a May 25 release for his album, Repaint, in creative partnership with Nashville’s Neon Cross Music.

Dial is set to graduate from the University Of Texas McCombs School of Business May 19.